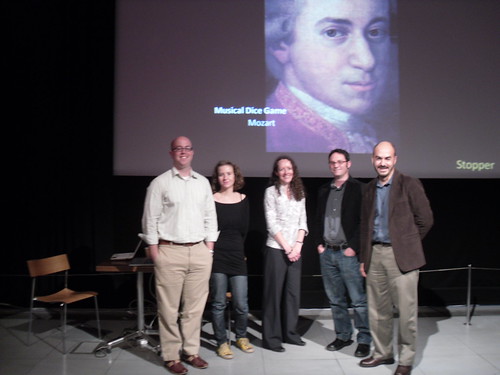 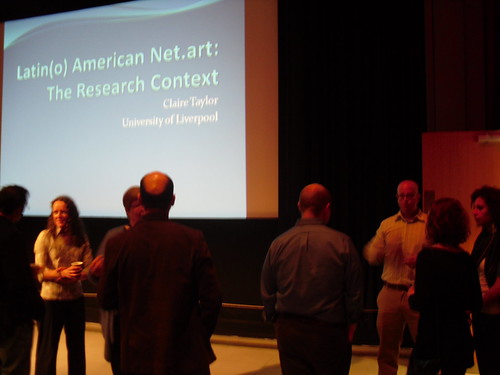 Some of the most exciting and innovative developments of cultural production in recent years have taken place at the interface between literary-artistic expression, and new media technologies. This workshop explored these new developments, and offered the opportunity to discuss in a relaxed and informal environment net.art, networked installations, video art, digital story-telling and tactical media, amongst others.

Heather Corcoran is Curator at FACT (Foundation for Art and Creative Technology), the UK’s leading centre for the production and exhibition of artists work in new media. With a specialism in media art and music she has delivered commissions and group exhibitions including MyWar (2010, FACT & Edith Russ Site for Media Art) and Space Invaders (FACT & Netherlands Media Art Insitute). Heather is a contributing curator of the Liverpool Biennial, curator for the Abandon Normal Devices festival, and curator with the Media Facades Festival 2010. She has also worked hands-on with free software/technology communities, as a Developer of Puredyne, the GNU/Linux distribution for media arts. She holds a BFA (New Media) from Ryerson University in Toronto, and an MBA from Imperial College, London.

Aneta Krzemien Barkley is currently working towards a PhD at the Liverpool School of Architecture as part of a collaborative programme between CAVA and FACT. Her work constitutes a part of a larger AHRC-funded research programme focusing on FACT and its role in the socio-cultural transformation of the city. Her research examines the transformation of contemporary art practices and the changing role of new media art in a wider socio-cultural context through a series of case studies focusing on FACT’s recent and current projects. It considers hybrid forms of contemporary artistic practices combining media art, performance, public art, and community art projects, while critically investigating the potential of those practices to offer new forms of engagement, participation and valid platforms for social dialogue. The research also examines the role of technology in providing new ways for artists and audiences to initiate and participate in cultural projects, changing the role and perception of art within society. Aneta was recently awarded a place on the AHRC funded Public Engagement Training Programme for Humanities and Arts Postgraduate Researchers at Tate Liverpool.

Claire Taylor is Senior Lecturer in Hispanic Studies at the University of Liverpool, and General Editor of the Bulletin of Hispanic Studies. Her research interests include Latin American women’s writing, with a particular focus on the novels of Albalucía Ángel, Carmen Boullosa, Laura Esquivel and Griselda Gambaro, and Latin American hypermedia narrative, net.art, and literary blogs, with a particular interest in the works of Belén Gache, Eduardo Navas, Marta Patricia Niño, Ricardo Miranda Zúñiga, Jaime Alejandro Rodríguez, Coco Fusco and Marina Zerbarini. She is joint leader on a collaborative project between Liverpool and the University of Leeds on Latin American Cyberculture and Cyberliterature, and is currently working on a co-authored volume, due out in 2011/12, on the discourses of Latin American cyberculture. She is also working on several articles and a monograph on the subject of Latin American net.art, as well as organizing a net.art workshop and a conference on Latin American cybercultural studies in May 2011. Recent publications include: Identity, Nation, Discourse: Latin American Women Writers and Artists, ed (Newcastle: CSP, 2009); Latin American Cyberliterature and Cyberculture, ed. with Thea Pitman (Liverpool: Liverpool University Press, 2007); and Bodies and Texts: Configurations of Identity in the Works of Griselda Gambaro, Albalucía Ángel and Laura Esquivel (Leeds: Maney for the MHRA, 2003).

The workshop also included a public performance of Stopper, given by Diego Bonilla and Sean Hovendick.

Diego Bonilla studied for a PhD in Mass Communications at the SI Newhouse School of Public Communications, at Syracuse University. His first hypermedia story, A Space of Time, produced at the culmination of his doctoral studies, obtained significant academic and artistic awards. Syracuse University awarded him the 2003 Doctoral Prize for his use of longitudinal quantitative methods to analyze, and mathematically model, user behavior in the hypermedia story. In 2004, A Space of Time was awarded the Internet/Multimedia category at the Moscow International Film Festival. Diego works comfortably at the intersection of Storytelling, New Media Engineering, and Quantitative Research Methods. Currently, he is a professor at the California State University, Sacramento, where he teaches both multimedia production courses for undergraduates and research oriented courses in Computer-Mediated Communications for graduate students. His latest work includes the development of a method and an apparatus to create immersive virtual environments of photographic quality.

Sean Hovendick graduated from Eastern New Mexico University studying broadcast production and computer animation. After ten years of industry experience providing motion graphics, animation and multimedia production on national television and interactive projects, Sean went on to earn an MFA in Computer Art from the Department of Transmedia at Syracuse University. As a media artist credited with both national and international exhibitions, Hovendick creates interactive, procedural and time-based artworks that explore the hidden forces of power, identity and social order within the mediated psyche. Currently a professor teaching courses in digital imaging, interactive design, data visualization and motion graphics, Sean is also Coordinator of the Graphic+Media Design program in the Department of Visual Arts at the Sage College of Albany in upstate New York. His contributions to the Stopper project include videography, editing, programming and consulting.

The approach that Diego has taken in his latest production, Stopper, continues pioneering a new form of hypermedia storytelling that creates endless variations of the same audiovisual story. These experiences are unique in that they empower viewers to determine the editing of a movie by manipulating the controlling variables of an algorithm. Once this viewer interaction takes place, the sequencing of the cinematic elements for the rest of the experience is determined through the coding of semantic information that describes the media/movie database. Besides Stopper’s algorithmic variations, Diego also seeks multiple variations of his hypermedia story by releasing the media/movie raw files for public use under a Creative Commons License.

Content on this site, other than the header image, is licensed under a Creative Commons Attribution-NonCommercial-NoDerivs 3.0 Unported License.

All images in the blog header are from Flickr, available via Creative Commons. Credits (from left to right): le dieu, pbelasco, guima-san, anaaldea, bizantine.

This header image is licensed under a Creative Commons Attribution-NonCommercial-ShareAlike 3.0 Unported License.